Cologne is the first ‘real-world lab’ where this approach has been successfully tested and developed. In 2011 the concept of introducing a ‘Sunday of Sustainability’ in this city was honoured with a local award (Dialog Kölner Klimawandel) for innovative project ideas aimed at climate protection in the city. This is not just another event for citizens to enjoy for the day before going back to their normal lives; it should serve as a “catalyst for a transformation of the city towards sustainability and post-fossil society” (Brocchi 2012: 27). To bring the idea to life, a diverse local network was founded. Nearly 130 organizations, cultural institutions, schools, initiatives and companies (among others) and many committed citizens have signed up to the Agora Köln (Agora Cologne). The platform’s name describes its purpose: in the ancient Greek polis, the agora was the public meeting place where direct democracy emerged. Citizens met there to collectively determine how to develop their own city. Likewise, the Agora Köln pursues the goal of urban development from the bottom up, through unconventional alliances for sustainability between actors from different sectors (environmental, economic, social and cultural) and between neighbourhoods, civil organisations and local institutions. 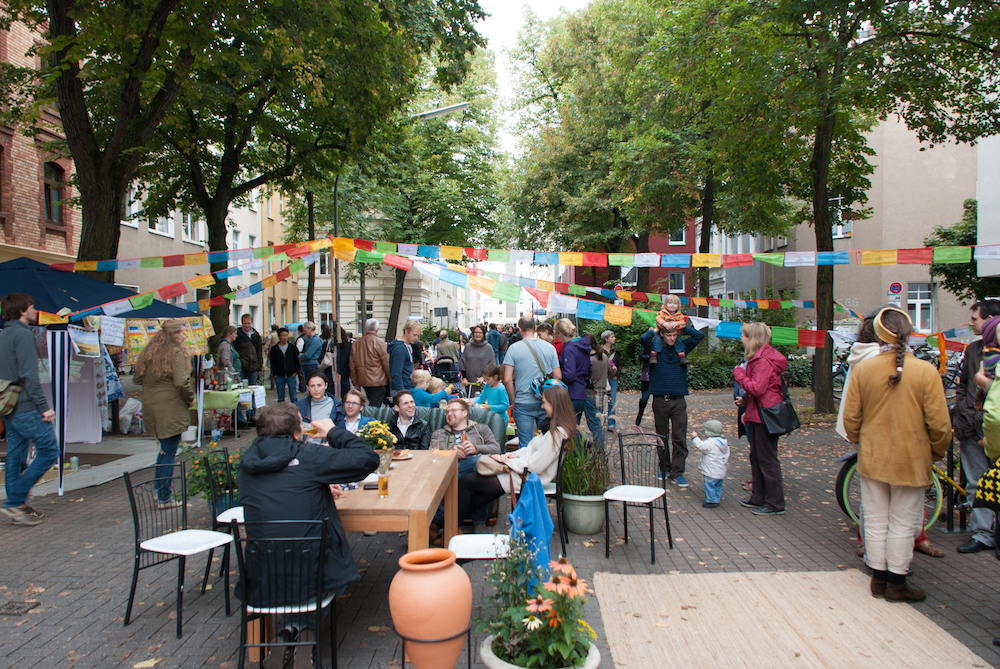 But where is the agora in the modern city? Unfortunately, public space is increasingly occupied by traffic and commercial activity, where people take on the role of motorists and consumers; accordingly, political and economic institutions follow suit, designing spaces that are well suited to motorists and consumers. Urban open spaces in which one can be a citizen (a political subject instead of an object) become increasingly scarce. The Agora Köln is also campaigning for a “right to the city” (Lefebvre 1968; Harvey 2013), more precisely, for everyone’s right to a viable and liveable city. On the Day of the Good Life, the network together with the neighbourhoods transforms the space for traffic and consumption into an open agora. This transformation is made possible by a corresponding (and so far unanimous) decision made by the neighbourhood’s representative assembly. The Day of the Good Life shows the transformative potential of public-citizen-partnership instead of public-private-partnerships. As many streets and squares as possible are then closed off to motorized traffic and in some cases completely free of parked cars. The space becomes a large open-air public stage, where community members can socialise and implement their own concepts of the ‘good life’. The condition is that all action must be non-commercial: nothing can be sold or bought, only donated or shared. The euro gets replaced by a new currency, so to speak, that of trust, for one day in that neighbourhood. The sphere of the “gift economy” (Mauss 2016) expands from the familiar circle to include the neighbourhood. In the family, trust and a sense of community need two main ingredients:

Every Day of the Good Life is a step towards the sustainable transformation of the city. The introduction of the Day itself was only the first step; every following year, the steps towards transformation should build on that. Since 2013, the Tag des guten Lebens takes place once a year in a different neighbourhood of Cologne: 2013 and 2014 in Ehrenfeld, 2015 in Sülz, 2017 in Deutz and this year’s 2018 in Agnesviertel/Eigelstein. Each of these areas (1–2 km², 20,000–30,000 inhabitants, 25–35 streets) went car-free and were remodelled by civil society and local residents for one Sunday.

For each of the neighbourhoods, all of the residents were invited several months beforehand by the Agora Köln to a community conference, where the offer to govern the district for one day from the bottom up was presented. In this meeting, the residents were subdivided into street communities to coordinate themselves. The principle is that smaller groups and spaces better correspond to the human scale than bigger ones. Every street community met autonomously in the following months and discussed various questions: What are some ideas for better living on our street? How would we live together? Which kind of mobility do we want in our neighbourhood? How do we want to promote solidarity and stop gentrification? On the Day of the Good Life, every street community has the chance to take the results of their own discussions on the good life in the open space of the street and turn them into a reality. Here the transformation isn’t reduced to a dialogical process or a process of enlightenment, dominated by people with an academic background (who can better deal with verbal communication and rational knowledge). In this process, as much responsibility as possible is transferred to local residents. The Day of the Good Life is a social sculpture, in that the city is shaped by a collective creativity in a self-determined way. Every citizen becomes an artist (Beuys 1978). The first commons intervention takes place the day before when everybody parks their car further away, dramatically changing what the neighbourhood looks like. People experience self-efficacy, where with just one small action, they can make a radical impact on their neighbourhood. What would the city look like without cars? The nonverbal communication of making things together is much more inclusive than the verbal one, and experiencing sustainability works on a much deeper level than hearing about it. Every citizen makes or experiences sustainability at their own front door. It is interesting to see that the most typical action neighbourhoods take on the Day of the Good Life is to transform the street into a common dining and living room. Anonymity is partially reduced; people who for many years lived side by side without knowing each other meet here for the first time. A woman, resident of Ehrenfeld, said to me once: “Since the Day of the Good Life, I need an extra 15 minutes every morning when going to the bakery, because I get stopped by people I never knew before.” (Brocchi 2017, p. 119)

The Day of the Good Life serves first as a catalyst for social interaction in the neighbourhood. On the one hand, the residents meet regularly in advance to design and organize the program for the day in their own neighbourhood or on their own street. On the other hand, the day itself creates open space in the form of car-free squares and streets, where social interaction takes place and is promoted through joint action (e.g. breakfast outdoors with neighbours). For its part, social interaction generates trust, and this plays a key role in transformation processes towards sustainability for several reasons: 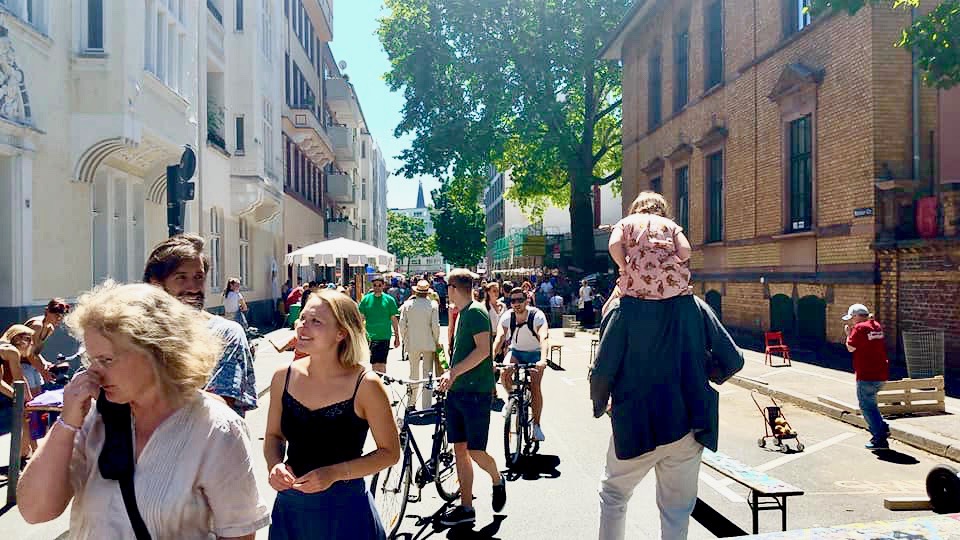 If the financial crisis and the crisis of democracy are trust crises, then democracy and the market should be re-founded in a more sustainable way there, where trust can emerge again, where people can interact in everyday life in person, namely at the local level. Where producers and consumers know each other personally, abuse is unusual; advertisement isn’t needed to artificially replace the missing trust.

The promotion of neighbourhood and democracy is the constant in the transformation behind the Day of the Good Life as a process. This process is made progressive by annually rotating what neighbourhood the Day of the Good Life takes place in and what that year’s main issue focuses on. This main issue is defined by the Agora Köln together with the neighbourhoods and corresponds to whatever those citizens are worried about, turning into a new common step towards the transformation of the city. In line with the launch of the first Day of the Good Life, the main issue in 2013 in Cologne was sustainable mobility, against the extremely car-friendly politics of recent decades. The 130 organisations behind the Agora Köln defined a common alternative mobility programme for the city (Agora Köln 2015), and the Day of the Good Life served as a high point in a city-wide campaign for a change in mobility. While the secondary streets were governed by the respective street communities, Ehrenfeld’s main traffic road was reserved for a central programme focussed on the main issue. Related organisations showed how sustainable mobility can work. Because the visitors from outside were concentred here, the secondary streets offered a more protected space for the neighbourhoods. Every Day of the Good Life is the biggest car-free day in Cologne since the 1970s, and to facilitate the absence of the car on the Day of the Good Life, public transport throughout Cologne should be free, as per the original plan (Brocchi 2012, pp. 4, 29). The Cologne City Council voted in March 2016, by a large majority, for a day without tickets from the city’s transport companies.

To address diversity in civil society and promote a multi-dimensional urban development, the issue that shapes the transformation steps changes each year, rotating between ecology, economics, society and culture. The main issue for the Agora Köln 2014 and 2015 was free spaces and common spaces in the city, and in 2018, sustainable nutrition. The rotating of issues is very important for attracting different milieus and interest groups. Diversity begets diversity.

Through the Day of the Good Life, every single step of transformation becomes the focus of public and media attention, which in turn boosts its implementation. The yearly rotating of neighbourhoods and main issues allow the Agora Köln (as a local movement for a progressive transformation of the city) to grow constantly, by networking with a new neighbourhood, milieus and stakeholders. When enough neighbourhoods are mobilized, the Day of the Good Life could take place throughout the whole city, so that there are no more ‘producers of the good life’ (the residents of the car-free neighbourhood) and ‘consumers of the good life’ (the visitors from outside), but only prosumers of the good life throughout the whole city.

Davide Brocchi, born in 1969 in Rimini, Italy, moved to Germany in 1992 and lives in Cologne. The graduate social scientist works as a transformation activist, publicist, researcher, and lecturer. His work focuses on the cultural dimension of sustainability, the formation of unconventional alliances and urban transformation as a participatory process. Among other things, he initiated the Festival of Cultures for another World (2003, Düsseldorf), the nationwide networks Kulturattac (2003) and Cultura21 (2005), the Alliance Agora Cologne and the annual Day of the Good Life: Cologne Sunday of Sustainability (2012). In 2017 he published the book Urbane Transformation. Zum guten Leben in der eigenen Stadt (Urban Transformation: Towards a Good Life in Your Own City). In addition to social sciences, he studied politics, psychology and philosophy, among others with Professor Umberto Eco at the University of Bologna. He is a doctoral student at Heinrich Heine University in Düsseldorf. For further information: davidebrocchi.eu

4. Bourdieu, Pierre. (1984) Distinction: A Social Critique of the Judgement of Taste. London: Routledge.

8. Harvey, David. (2013). Rebel Cities: From the Right to the City to the Urban Revolution. New York: Verso Books.