A personal note: Why I'm not obsessed about banning ads

This little personal note of mine might create some controversy amongst our readers. And if it does, I would welcome a discussion as it might help sharpen our minds on some important questions.

I lived for 6 years in London and must admit that I often enjoyed the ads in the London underground trains. Often they are very creative and funny and know how to capture your attention in an unpretentious way. Some ads in the cinema are entertaining to watch as well… other ads can be annoying and on commercial TV channels where movies are interrupted by TV ads this can be a frustrating or rather a must-avoid exercise. I do believe as well that advertisement can serve a positive function in an economy if they have a strong focus on spreading honest and truthful information about novel products and their specifications. How will I let people know about a concert we are going to give or a new album recorded if I am not allowed to ‘advertise’ it?

So, as you can see, I have mixed feelings about banning advertisements or to be completely honest, I don’t share the views of those who demonise all type of ads.

My problem is that actually street ads don’t really bother me that much. I understand that if they are flooding the streets, they can be an aesthetic nightmare and of course we know about the negative effect ads can have by enhancing our consumerist cultural values and attitudes. I can see why the initiatives and campaigns focussed on banning street advertisements in cities or neighbourhoods do create excitement among part of the local communities and of course there are the successes like São Paulo, where street ads have been banned.

However, I believe that it would be better and smarter for activists to shift the discussion towards those key phenomena where the market and commerce is constantly invading more spheres of our lives and where we might find more allies in all parts of society if we uncover the perverse logic of this paradigm. In other words, the focus needs to shift toward reversing the process of constant commodification and commercialisation of almost any sphere of human activity and public life and away from the question if there should be any ads in public transport/space at all. 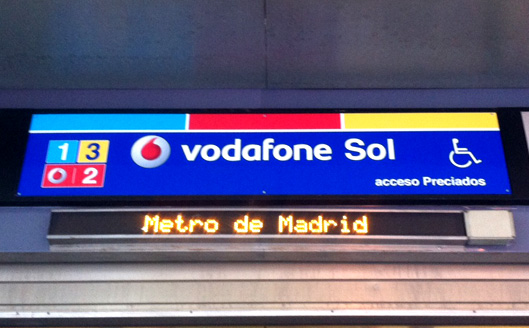 The problem is that the more profit maximising corporations we have to deal with, the more we are treated as consumers and not as citizens. And the more desperate corporations become to increase their market share, the more we are pushed into consuming more. Also the more public institutions become desperate to increase their income through corporate sponsorships, the more likely we will see such extreme phenomena like when in 2013 the underground station at the most emblematic square in Madrid, Plaza del Sol, was suddenly renamed ‘Vodafone Sol’ in exchange for 3 million euros. The mayor of London, Boris Johnson, speculated last year with the possibility of rebranding tube stations like Tottenham Court Road to become Samsung Court Road.

Michael Sandel suggested in his book What Money Can’t Buy that we need a much more profound societal conversation about the moral limits of markets. Markets (and ads) clearly serve a purpose and can serve human needs. The problem is that the massive invasion of markets and aggressive marketing into everything and everywhere is doing more harm than good.

There is something in the air: there is a growing sense in different parts of our societies that we need to fundamentally shift our economy but there is also a helplessness and disorientation about the way things could change and what the alternatives could look like. Social activism can play a role in kick starting an informed conversation instead of launching dogmatic campaigns against ads that may not inspire broader parts of society to a deeper reflection about today’s market paradigm and its alternatives.