The last few months we have been busy organising our annual network gathering, which you can read about in this newsletter. We have also published a discussion paper and have enjoyed reading the results of the online survey on leverage points, a report of which is at your disposal.

We live in a polarised world, where different tribes live increasingly separate lives with little knowledge about the motivations and realities of the other tribe. Social media algorithms bring out the worst in humans by activating our ancient tribal circuits. We are operating in ever soundproof ideological echo chambers, where we only listen to opinions that we already hold. We develop and strengthen closed ideologies that become difficult to break though. 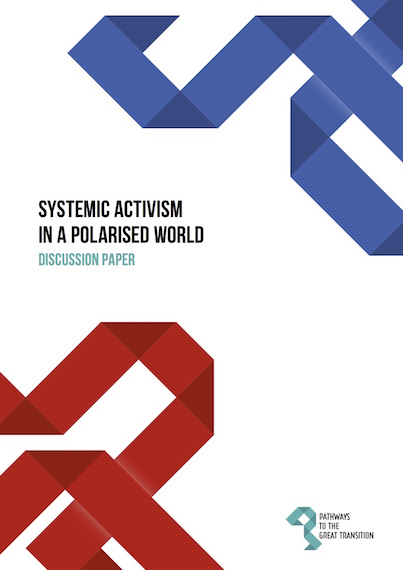 Our assumption is that to be politically successful the Great Transition cannot take shape inside an ideological echo chamber in this increasingly polarised world.

The aim of this discussion paper is to help increase understanding about what causes polarisation and to foster discussion about what systemic activism should do in this situation. Does progressive activism contribute to polarisation? Is this even a good thing? What does a wise activism look like, one that doesn’t contribute to chaos and tyranny and instead helps to catalyse positive systems change?

The paper was intended to give an impulse to the discussions at our last Smart CSOs gathering, the Agora for the Great Transition, held in Paris in March 2018. We will continue exploring these questions over the coming months as part of our Pathways to the Great Transition project.

Agora for the Great Transition

In March we had our most recent Smart CSOs Lab gathering, the Agora for the Great Transition. We have put together a short overview/report about the Agora on our website. It includes videos and documents prepared for and about the Agora

and provides a taste of some of the discussions that took place.

In addition to the material that is publicly available, I would like to exclusively share with you the video of an exciting keynote speech that was given at the Agora by evolutionary biologists Bret Weinstein and Heather Heying. You will need a password to watch it: Evolution

Bret Weinstein: “The human mind is the most complex entity in the known universe, and that complexity evolved for a reason. It provides human populations with the ability to discover new niches. But in endowing people with that marvellous superpower, evolution sowed the seeds of our potential destruction. We have discovered the means by which to steal from the future in order to thrive in the present. Self-destruction would be inevitable but for another evolutionary gift, the ability to describe alternative futures and to choose amongst them…”

In January we asked you to participate in an online survey on effective leverage points for the Great Transition. We are grateful that 51 members of the Smart CSOs network took part.

With this survey, we aimed to understand what our network currently thinks that civil society can/should do to most effectively work towards systems change. The survey is part of the Smart CSOs Lab’s Pathways to the Great Transition project. The project’s aim is to develop new knowledge about how activists, civil society organisations and grant makers can develop concrete strategies that can effectively catalyse and support deeper economic systems change.

We have prepared a report that includes the anonymised summary of the survey results. The ideas you provided about specific actions and leverage points that civil society actors should work on are very rich and diverse, and we are grateful for this input that will prove valuable to our project.

Going forward we will have to cluster the ideas provided and evaluate and discuss these further. We will keep you in the loop about how the project evolves.

You might also be interested to read our short report about an Agora session where we discussed and drafted a set of criteria for identifying effective leverage points. This is a work in progress — the ultimate aim is to develop a tool for CSOs and funders that helps evaluate approaches and actions and the potential these have for systemic change.

Why do some crowds turn to wisdom and others to madness? A game.

Have you ever asked yourself why the ‘wisdom of the crowd’ works better in theory than in practice? Why isn’t it called the madness of the crowd, as it more often seems to be? If so, you should play this game. It’s a fun way to explore how groupthink evolves and how we can avoid it.

The author of the game concludes: “Like how neurons pass signals in a brain, people pass beliefs and behaviours in a society (contagions). Not only do we influence our friends, we also influence our friends’ friends: ‘Be the change you want to see in the world etc.’ But like neurons, it’s not just signals that matter, it’s also connections. Too few connections and complex ideas can’t spread. Too many connections and complex ideas get crushed by groupthink. The trick is to build a small world network, the optimal mix of bonding and bridging: e pluribus unum.”

“The madness of crowds is not necessarily due to individual people, but due to how we’re trapped in a network’s sticky web. That does not mean abandoning personal responsibility, for we’re also the weavers of that web. Recommendation: Be sceptical of ideas that flatter you, spend time understanding complex ideas. And improve your connections, bond with similar folk, but also build bridges across cultural/political divides.”

People see the world differently, so how do we create dialogue? An article.

In his book The Righteous Mind, Jonathan Haidt argues that people see moral issues differently not because they are uneducated, unmotivated, or otherwise flawed, but because there is more to morality than care and harm (which is the morality that dominates the thinking in progressive activism). “Haidt likens our sense of morality to our sense of taste: both are informed by multiple receptors through which we experience—indeed, perceive—the world.”

Debra Mashek, the author of this article, asked students 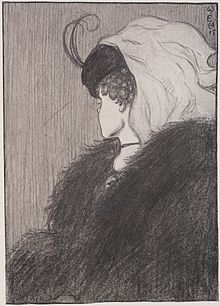 in her psychology class to discuss what they saw in an ambiguous figure (like the one pictured here). She was amazed by the sort of dialogue that unfolded, one that was “sorely missing in our society about the important challenges we face”. There was “genuine curiosity about others’ views” and “deliberate effort to learn from others”. She concludes that “seeking out and truly trying to understand another person's perspective takes effort. It takes curiosity. And it takes the humility to admit that we haven’t cornered the perceptual market”.