We want to help systems change discussions among civil society actors and funders become much more concrete and less dogmatic, as well as rooted in existing knowledge about human nature and human systems, rather than our reflexes and emotional attachments to particular theories of change.

At our last annual workshop in Barcelona in October 2016, we wanted to kick-start this dialogue. As usual we had a mix of participants who have been involved for a longer time in the Lab (19) and others who were new (10). Most participants were working in NGOs (social justice, environment, etc.) or in academia/research organisations.

Via a pre-workshop survey and a number of participatory exercises at the event we created an initial picture about what was important to participants about their visions of a sustainable and just future, and about how they imagined a transition to such future could happen. We suspected that in this group there would be common patterns but also important differences with regard to visions and theories of change. We wanted to make these differences visible and have people enter into a dialogue about them, as well as to start unpicking the assumptions that lie underneath both visions and theories of change. We don't think that we achieved all of these ambitious goals, but nevertheless it was a promising start. We were able to identify a number of strong views, common patterns and differences that we would like to look into more in depth during the course of the research dialogue. What follows is a brief summary of the most important trends we have identified. 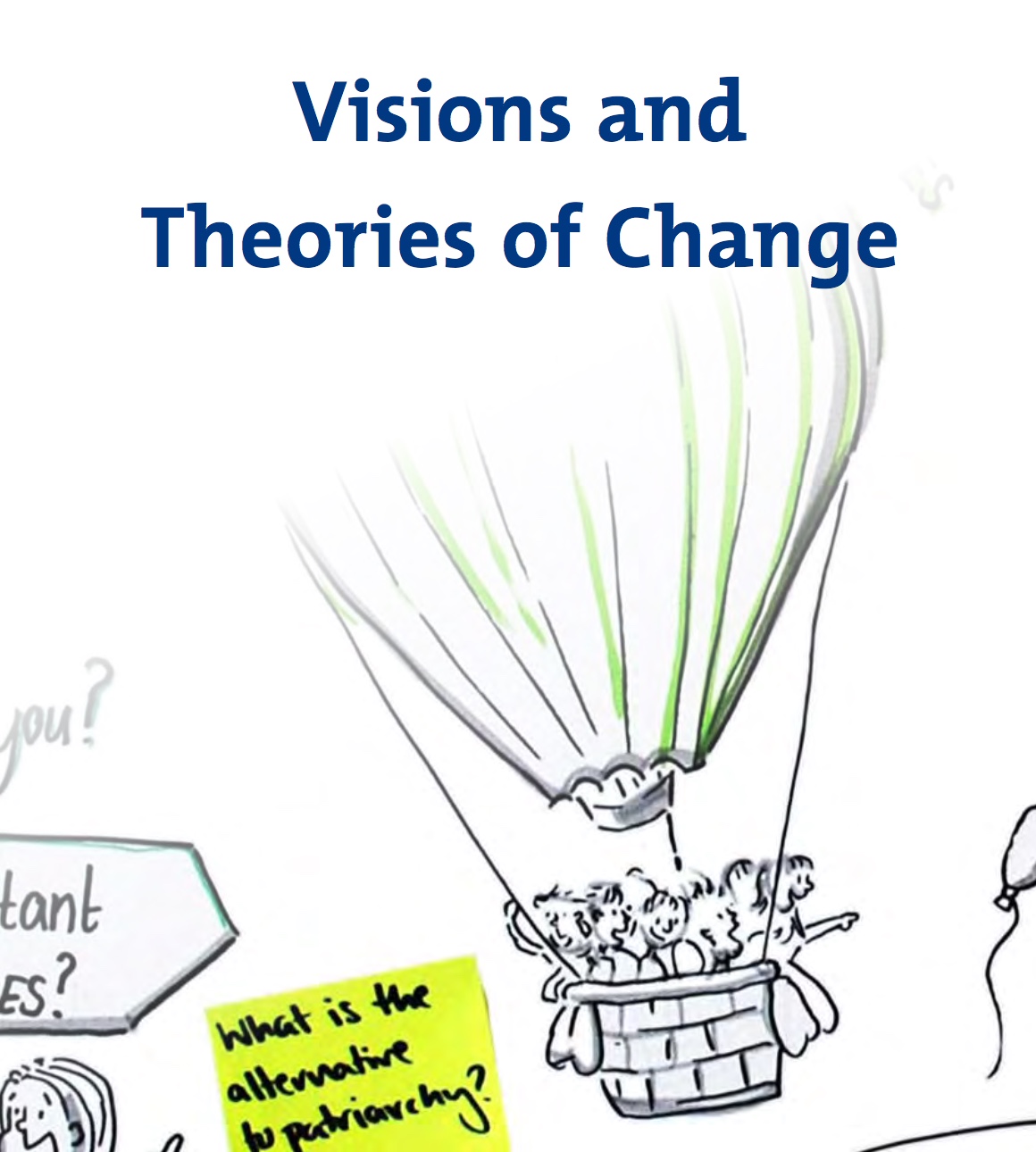 Among participants there was widespread belief that CSOs should work to influence culture, communicate different values, change mindsets, create new narratives, and tell new stories — even at the level of worldviews. The importance given to this level of change contrasts with the acknowledgement that most CSOs still find it hard to identify ways to do this and lack the capacity for this work. A question for us to focus on is: how to develop capacity on cognitive linguistics in organisations?

The transition won’t be smooth — anger is high

The survey showed that the vast majority of participants don’t believe that the transition will be peaceful, but violent. It was remarkable that almost nobody thought that civil society could still be a driver for a peaceful transition. This coincides with responses to another question, where we saw that a majority of participants feel angry about the systemic crises. Some feel specifically motivated by anger. This raises the question: are fear and pessimism useful conditions to work on systemic change? Or do we need a higher dose of optimism to become successful leaders in the Great Transition and to inspire others to become part of the movement?

Shaking up the system

Our workshop happened before the U.S. elections, before Trump was elected president. We knew that many (especially young) supporters in the Bernie Sanders movement felt that Clinton was not a better alternative than Trump — we now know that many of them didn’t vote for her. We asked our participants if they thought that it would be a good idea that Trump became president as a strategy ‘to shake up the system and start the revolution’. The group was split in two: approximately half the group tended towards this position; half tended towards the other way. One participant said, “Activism and public engagement and alternative economics develop during crises.” Back then, few thought that Trump would win, but now we might have the chance to observe if this theory of change is right, or if instead the suffering for many increases for a long, dark period of time. Are we shaking up the system with authoritarian right-wing regimes only for these to fail after a short period? Or, are we experiencing the end of the liberal world and entering a stable dark nationalistic era? More to be discussed and observed in the coming months.

Patriarchy as the most important root cause of our systemic crises?

One question that has come up strongly more recently in our network is the question as to whether patriarchy is ultimately the most important root cause lying underneath climate change, inequality, etc. the rationale being that male dominance was responsible for creating the power structures of a system based on competition, violence, domination, colonialism and oppression, whereas a feminization of politics and the economy would be a core leverage point to resolve the crises. At our workshop a majority of participants were inclined towards patriarchy as a more important root cause than capitalism. (We asked this question to provoke discussion and reflection about root causes; not to make people position themselves on one side.) One definition of a root cause is: “It’s clearly a major cause of the symptoms, it has no worthwhile deeper cause, and it can be resolved.” Most of us would agree that, if we understand the feminization of politics and the economic system as a change towards the values of inclusiveness, collaboration and the common good, it would be a key element of the Great Transition. Maybe rather than discussing if the root cause is the economic system or patriarchy we should ask ourselves: Would it make any difference to our work? Or, to return to a key element in the definition of a root cause, can it be resolved?

Power of the few as the most important political challenge we are facing?

We asked participants what aspect of the current political system poses the most important challenge to systemic change. More than half of the responses stated that the biggest problem was power (and preservation of power) in the hands of a tiny political and wealthy elite. This view was not uncontested, however. Some participants felt that the lack of effective global governance is the biggest challenge. Indeed, the case has been made that under the current regime of globalisation the core challenge is rather the powerlessness of national governments and indeed of the democratic system. The Korean-German philosopher Byung-Chul Han adds another perspective that might be in conflict with the conventional power narrative: “The system-preserving power [of the neoliberal system] no longer works through repression, but through seduction — that is, it leads us astray. It is no longer visible, as was the case under the regime of discipline. Now, there is no longer a concrete opponent, no enemy suppressing freedom that one might resist... The subjugated subject does not even recognize that it has been subjugated. The subject thinks she is free. This mode of domination neutralizes resistance quite effectively.” This is the beginning of a deeper dig into the concept of power, what types of power are important, who has the power in the current system and what all this means for our theories of change and strategies for the Great Transition.

The vision (and dream?) of local sovereignty

We asked participants what they felt the role of current national and supra-national institutions would be in their vision of the Great Transition. This was a contested question. More than a third of participants responded that national and international institutions should either disappear or lose importance in favour of local institutions. One participant said: “The nation state is now the problem. Change will come from cities and regions and they will destroy the state.” However, another mentioned: “This version of localisation seen now is dangerous. (We) need good ‘glocal’ leadership to coordinate localism.” There is a widespread vision of localism in social movements, e.g. the degrowth movement. The question is: how desirable and realistic are visions where we mostly ignore governance systems on levels higher than the regional and local ones? Is the concept of sovereignty a useful one in times of climate change and high integration of the global economy?

These are just some of the questions that we will investigate further over the coming months, as part of our Pathways to the Great Transition project.

Any thoughts from you about visions or theories of change for the Great Transition are always welcome, e.g. via email or via our Facebook page.