In our April newsletter we are happy to share the latest developments in the Pathways to the Great Transition project, including the launch of a short publication. We have also made a selection of news, events and articles that we found worth sharing with you.

Any organisation or activist network that designs a campaign or a movement strategy uses a theory of change, be it implicitly or explicitly. Theories of change are the ideas and hypotheses (theories) people and organisations have about how change happens. These theories are based on assumptions about reality, about what is at stake, and how change can be brought about. Different theories of change and different visions can be in conflict with each other and the assumptions behind our visions and 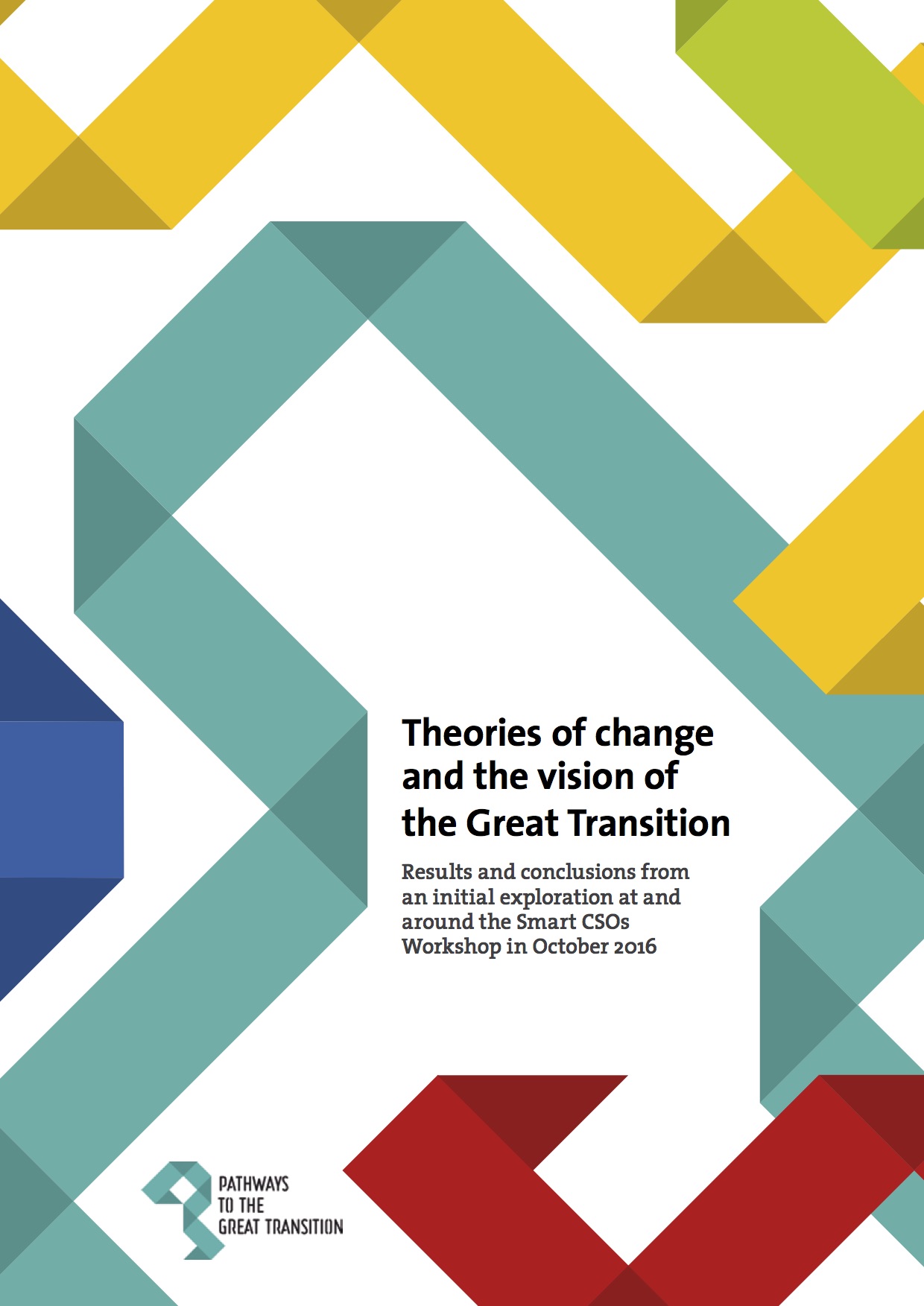 One of aims of the Pathways to the Great Transition project is to provide impulses to the discussion on systemic change / Great Transition strategies and critically reflect upon its landscape of discourses and theories of change.

We had a first go at this at our annual workshop last October in Barcelona. Before and at the workshop we asked questions and used participatory methods to start creating a picture about commonalities and differences among participants’ theories of change and visions for a sustainable and just future.

This short paper summarises the most interesting parts of the discussions and highlights where some of the tensions might lie. We would like to explore these and other questions in more depth during the course of the Pathways to the Great Transition project.

In another strand of the Pathways to the Great Transition project we are starting to work with (initially) three organisations that want to practice and experiment with new civil society strategies and approaches to change.

While we believe that at the Smart CSOs Lab we have developed the right language and tools to powerfully initialise conversations and reflections on system change strategies, we still lack more concrete examples for effective approaches. We believe that creating such examples will inspire other civil society organisations to take similar directions and become part of a movement towards the Great Transition.

With this work, we would like to demonstrate how civil society actors, funders, and grassroots activists can concretely work towards the Great Transition. We want to develop new knowledge via experimental practical projects, and test our ideas in practice.

The three organisations we are working with in this initial phase are Greenpeace Switzerland, Fair Trade Advocacy Office (Brussels) and Guerrilla Foundation (Berlin).

In each of these organisations we work with a small team of change agents. Together we work with an action-research approach: we apply and test ideas from the Smart CSOs framework in a practical, organisational context. We expect these projects to run over approximately a year.

Last chance to register for introductory workshop/training on Re.imagining Activism in Germany (in German)

Mohio e.V. in Halle (Germany) is hosting a workshop on May 19th and 20th based on the Re.imagining Activism guide (for German speaking activists).

At the training participants will explore why activism needs re.imagination and illustrate how mainstream activism avoids tackling the deeper, more systemic issues which need to be addressed by activists and civil society. The group will explore what a vision of new activism could look like and how civil society actors can adopt different complementary roles of systemic activism to strategically contribute to the Great Transition.

The deadline for registration is this Friday, April 28th. The workshop will be facilitated by Eva Ressel and Silke Peters, two long-standing Smart CSOs collaborators. See here for more information and to register.

Our friends at the Public Interest Research Centre (PIRC) in Wales have recently started a collaboration with the New Economics Foundation, the New Economy Organisers Network, and the FrameWork Institute to find out how people across the UK think about the economy and to explore how activists can use knowledge from cognitive linguistics (framing science) to communicate more effectively.

For example, “the system is rigged” is a frame that has recently been used by politicians like Trump, Corbyn and May.

“This is a frame that resonates, but at the same time it can stir anger and reinforce fatalism. Anger can impair thinking and narrow our ability to evaluate solutions, and, as communications expert Anat Shenker-Osorio puts it: “anger dismantles; it doesn’t create”. Fatalism is demotivating, and in this context reinforces the belief that it’s just human nature for people with wealth and power to try and stay at the top; that there is nothing ordinary people can do to change things. [...]

The job of framing the economy is not about landing on one message that resonates and hammering that home. It’s about telling a compelling and coherent story about what the economy is, how it works and what needs to be done. This story needs to provide meaning for messages like the system is rigged and be repeatedly told by people who, for whatever reason, bring credibility and charisma into the telling.”

See here for more information about the project. We will follow with great interest.

After two surprising results last year, we are all too familiar with the so-called echo chamber.

Breaking out of our bubbles is not only important to avoid the shock of waking up to unpleasant news, but also to make sure our discussions for a just and sustainable future include a plurality of voices. True democracy requires public spaces in which all voices are listened to and tensions are overcome through meaningful debate. 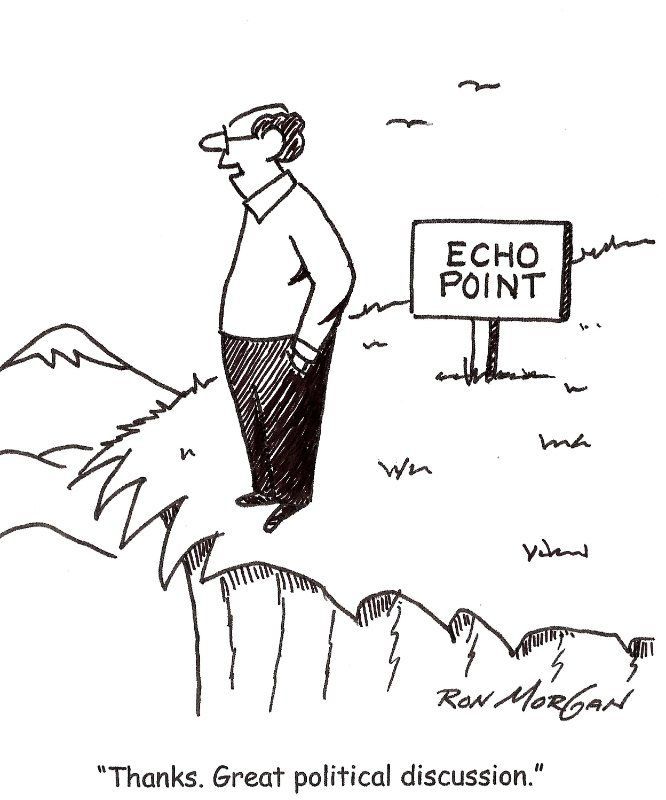 One experiment to help bursting these bubbles is The Echo Chamber Club — a human-curated weekly newsletter for all those who self-identify as ‘progressive’, ‘liberal’, or ‘metropolitan’. The weekly bulletin contains news its recipients may otherwise not come across, with the aim of fostering debate between an increasingly polarised left and right — in the hope that doing so can help us to include a diversity of viewpoints in our visions for the Great Transition.

Read this article for more on what The Echo Chamber Club is doing and why.

Cut the bullshit: Organisations with no hierarchy do not exist

Activist networks and movements like Occupy have been inspired in recent years to explore new ways of arranging themselves in ways that avoids any type of hierarchy or individual leadership. The idea of a networked structure that exists without hierarchy has shown to be an attractive one.

It seems, however, that it is not so simple in practice. It is often pointed out that one of the key reasons for the failure of the Occupy movement was its lack of leadership due to its horizontal structure.

This recent blog post shares lessons from five years working in distributed organisations, and warns against the interpretation of so-called flat organisations as having “no hierarchy”: “If you refuse to define power structures, informal ones will emerge almost instantly. Not expressing these can be extremely harmful to your organization.”